The bike parade is a celebration of Calhoun Street being open to bicycles for Open Streets 2019.  Participants do not have to decorate to be part of the parade, but the judging categories are for those with decorations.  Entries will be judged for awards before the parade starts. 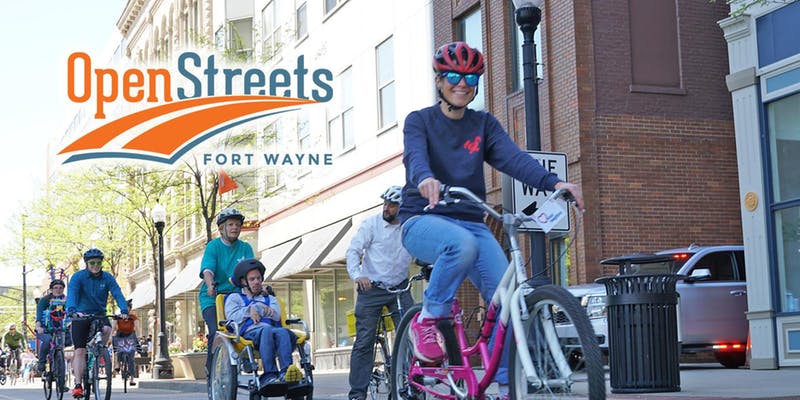 Bike Parade entries should report to the registration desk no later than 12:15 p.m.  The registration desk will be on Calhoun Street under the railroad viaduct, near Superior and Calhoun. Registration opens at 11:15 a.m. The parade starts at 12:30 p.m. and will go to the entire route of Open Streets, just over one mile, to Pontiac Street. Young children who aren’t able to do the full route are able to participate and will have a shorter route ending at Berry Street.

Mayor’s Choice – The Mayor’s choice awards go to entries that capture the “Spirit” of the City of Fort Wayne.

Downtown Theme – Awards given to those with theme tying to Downtown Fort Wayne.  Awards presented by the Downtown Improvement District.

Good Health Award -- Awards given to themes that promote good health. Bicyclists have an opportunity to win the Health Award, presented by Parkview Health.

Costume – The look that defines the theme is rewarded with the Costume Awards. Category includes separate awards for children, families and adults.

Use of Color – From bright to dark and shades in between, awards will be given for how entries are bringing color to Calhoun. Category includes separate awards for children, families and adults.

Creativity -- Out of the norm, award winners in this category give a fresh idea or look to their decoration.  Category includes separate awards for children, families and adults.

Business/Corporate Theme – Awards given to those celebrating their business or company.