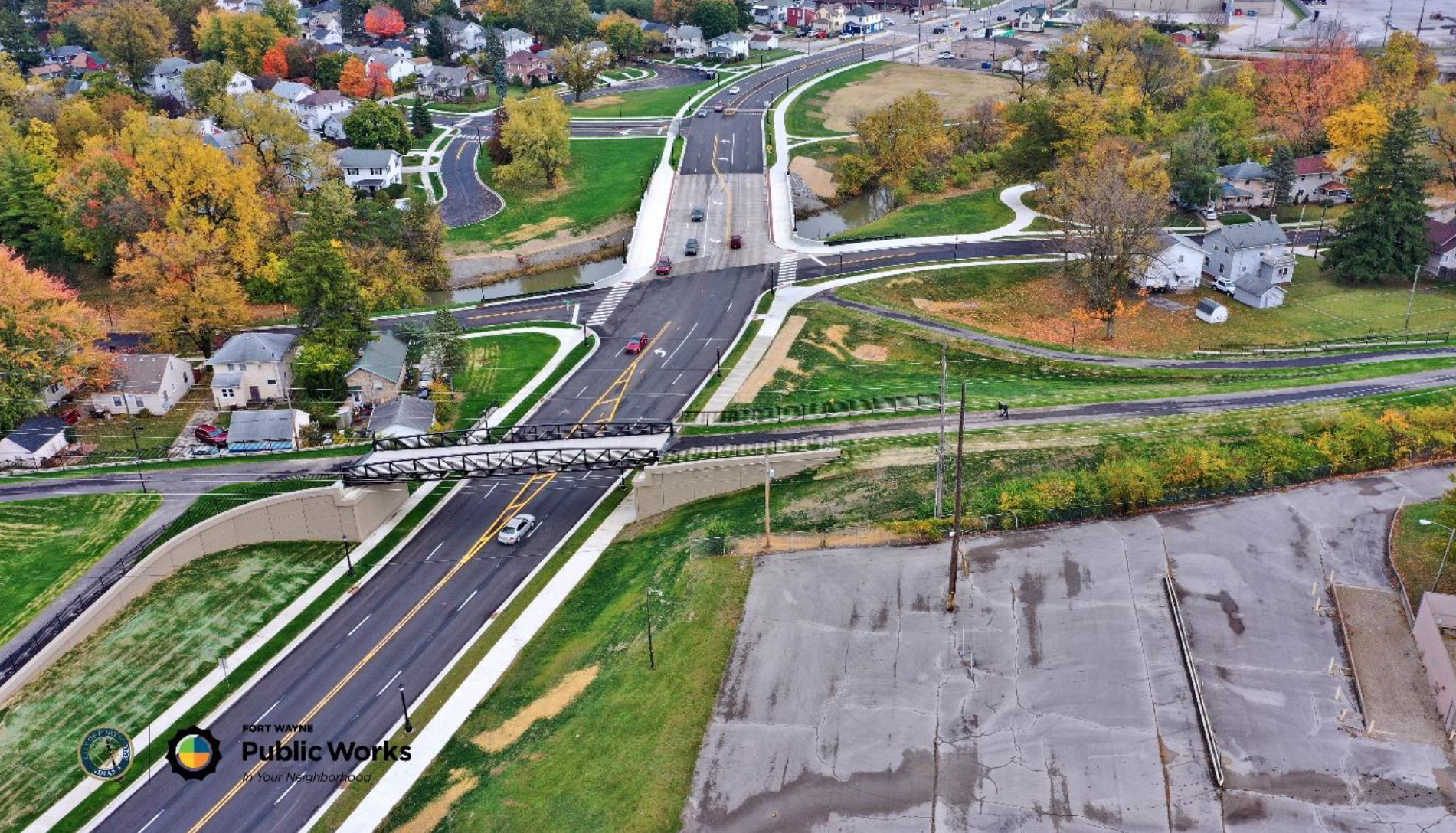 The City of Fort Wayne’s Public Works Division has a motto: “In Your Neighborhood.” That motto reflects the commitment the Public Works team has to strengthen neighborhoods, but just as important, it focuses on our ability to work with neighborhoods and the residents who dwell within them.

On the surface, the State Boulevard Realignment Project is a story about a failing bridge built more than 90 years ago, a bridge on a significant City street that often flooded because it was built too low, and the realignment of a road with a sharp curve that resulted in numerous accidents near the bridge.

But this story is more than concrete and asphalt. It’s about protecting history, preserving a neighborhood, working closely with passionate residents, improving safety, and creating a road that meets today’s needs into the future.

The planning for the project began in 2007, but studies for improving the area were done in the 1970s and early 2000s. Construction took place between 2017 and 2020 in two phases. The first phase, between Clinton and Spy Run, was constructed by Brooks Construction. Primco, Inc. constructed the second phase between Clinton and Cass, including the trail bridge. The project was designed and overseen by American Structurepoint, Inc. The investment for Phase I was $2 million, and Phase II was $8.2 million. Eighty percent of the project was paid for with Federal funds through the Indiana Department of Transportation (INDOT), and 20 percent from the City of Fort Wayne.

During the designing phase of the realignment project, more than 70 group and individual meetings were held—with residents, historical preservation groups and other interested parties. Their input resulted in additional design elements that offer traffic calming features, including landscaping, ornamental street lighting, crosswalks, sidewalks separated by a park strip, and turn-lanes where needed.

Construction was intentionally coordinated in phases to minimize inconvenience to the public. The road only had to be closed for 60 days to connect the new bridge and roadway into the roadway’s existing rehabilitated section.

Many steps were also taken to protect the environment:

Many unique steps were implemented to preserve the neighborhood’s historical elements:

A ribbon cutting ceremony was held on October 29, 2020 and Mayor Tom Henry was extremely happy with the project. "The new State Boulevard is a beautiful addition to our community. It enhances the area and supports the surrounding neighborhoods and economic vitality for all neighborhoods along this stretch of State," said Mayor Henry. "Residents remember the days when the road and bridge closed because of floodwaters, and when traffic backed up because of accidents at the sharp curve. The realignment and raised bridge make the area safer for all."